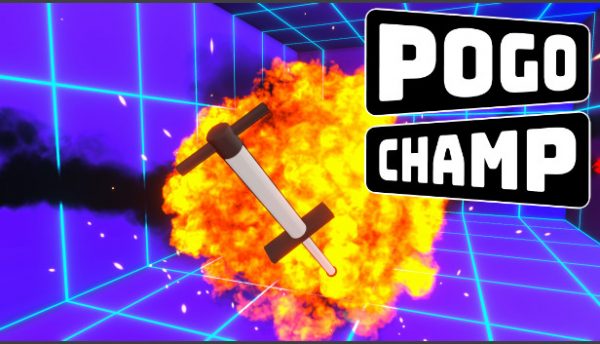 PogoChamp is a hidden gem and sadly does not get the love it deserves.

It is a game about overcoming controls, trying things, testing your patience, and learning movement mechanics. It rides among other similar games such as “Getting Over It” or “QWOP”, but much less frustrating. The controls aren’t hard per se, it’s just that they are difficult to master. I think the official description sums it up pretty well with “Fun, not Frustrating”. It’s a much smoother process here with learning; the starting levels just being simple tests of movement and learning how to jump. That is until you reach a “spike” in difficulty which has been said to be deliberate by the developer. This isn’t really a problem though since the game employs a star system that allows you to skip some levels based on your performance. You can always come back… and I suggest you do. As you progress and learn more, those difficult levels will be nothing after returning later.

I started my journey in PogoChamp with a keyboard and mouse. I do not recommend that even though it is possible; listen to the starting screen: “Controller Strongly Recommended”. The mechanics and controls of the game really shine when you have finer control of your movements which controllers will provide here. After 20 hours in the game, I could probably make it work with keyboard/mouse controls now that I am not absolute trash at it, but it was a rough start for sure.

PogoChamp features some of my favourite kinds of gameplay. Quick levels that you can play over and over again beating your previous score and competing in the leaderboard for the fastest times. Fortunately for me, and less fortunate for the developer, since there are not many players, I could get in the top 5 on some of the levels. Anything above that is pretty impossible for a more casual-type player like myself because a player named “WaltzingDucks” exists. This style of play is not for everybody, and luckily as mentioned above, you can just progress through the game more linearly if you prefer. You will need to replay some levels though to get more stars to unlock further levels.

The game itself is extremely polished; albeit, simple in design, UI, and concept. I will say some of the later levels get a bit muddy aesthetically, leaning towards more realistic or open-world scenarios. I think the game shines most with simple point a-to-b level designs. It’s hard to even fault anything here though since those different levels serve to break up the monotony and add some wacky variety. There are plenty of secrets in some of these levels as well which adds another hit of serotonin for me.

It has other modes such as survival mode and daily challenge which provide ever-so-slight deviations from the normal level-to-level gameplay for extra challenge and variety.

Overall, this is an amazing package and a really fun game. With the permanent price drop, this is a no-brainer if this sounds like something you would hate, then enjoy.